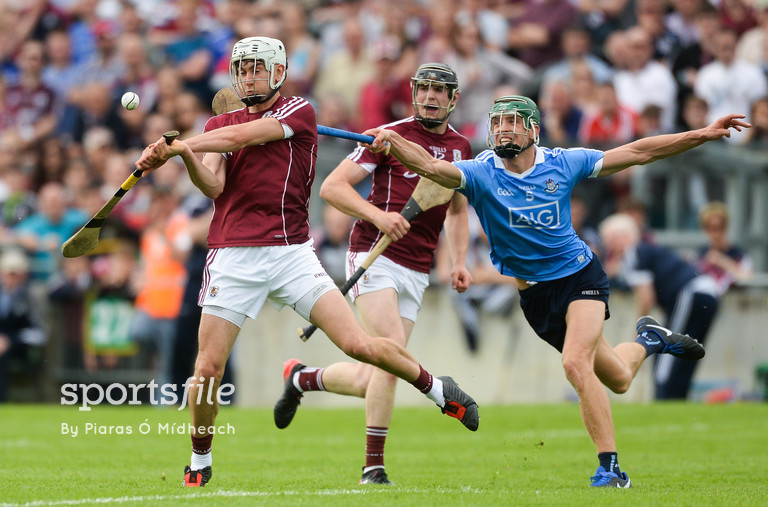 28 May 2017; Jason Flynn of Galway, supported by team-mate Joseph Cooney, behind, in action against Chris Crummey of Dublin during the Leinster GAA Hurling Senior Championship Quarter-Final match between Galway and Dublin at O’Connor Park, in Tullamore, Co. Offaly. Photo by Piaras Ó Mídheach/Sportsfile

In Hurling Galway are back in the Leinster Semi-Final after a big win over Dublin at O’Connor Park in Tullamore. Galway pulled away in the second half to run out 14 point winners.

While Davy Fitzgerald had to watch from the sidelines as his Wexford side beat Laois in O’Moore Park by 3-25 to 1-17 in another 1/4 final.

While in gaelic football, Ulster saw a one-sided affair as Tyrone saw off Derry by double scores, 0-22 to 0-11 in Celtic Park, with veteran Seán Cavanagh kicking six points from frees and one from play.

While in Munster Cork got a fright, when they needed to late points to secure victory over Waterford in Fraher Field on Saturday. Cork now play Tipperary in the semi-final.

And Clare beat Limerick in Ennis by the slimmest of margins, 1-13 to 1-12 it ended, the Banner now face Kerry in their semi.

And in Connacht, Leitrim came good in the end as they defeated a London side, featuring 3-time All-Ireland winner with Tyrone Owen Mulligan, by 3-10 to 0-16.