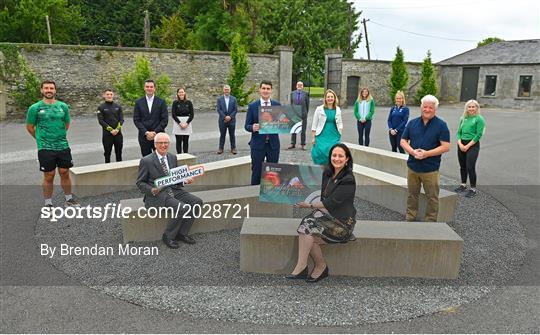 Purchase Print
2028721
View all images from this event
24 June 2021; Sport Ireland has published its new High Performance Strategy 2021-2032, a long term plan for the Irish high performance system over the next three Olympic and Paralympic cycles. A robust and comprehensive period of consultation and research underpinned the development of the Strategy which sets out the ambition and vision for high performance sport in Ireland. The Strategy will be delivered in partnership with the broader high performance community and is based on the philosophy that athletes and the people who support them are at the heart of everything. Sport Ireland has identified investment in coaching as the key to delivering its new High Performance Strategy and has appointed renowned athletics coach Stephen Maguire to lead a transformation of Irish coaching over the next ten years. The review of the Rio Games 2016 highlighted the importance of Governance and the direct impact on performance. The Strategy will place an emphasis on the governance of High Performance Programmes over the next period. Sport Ireland has developed the Culture Evolution Programme which will be expertly guided by John Donnelly. This programme will support National Governing Bodies as they seek to protect and maximise the experience of athletes, coaches, and support staff. Pictured at the announcement are Minister for Tourism, Culture, Arts, Gaeltacht, Sport and Media, Catherine Martin TD, and Minister of State for Sport, the Gaeltacht & Defence, Jack Chambers TD , with Sport Ireland chief executive John Treacy, and from left, rugby sevens player Harry McNulty, gymnast Rhys McCleneghan, OFI chief executive Peter Sherrard, Niamh O'Sullivan of Sport Ireland, Liam Sheedy of Sport Ireland High Performance, Sport Ireland high performance director Paul McDermott, Lisa Clancy of Paralympics Ireland, heptathlete Kate O'Connor, hockey player Sarah Hawkshaw, Stephen Maguire of Sport Ireland and paralympian Orla Comerford. Photo by Brendan Moran/Sportsfile
Email to friends
Thursday 24th Jun 2021
1 of 1
More Images