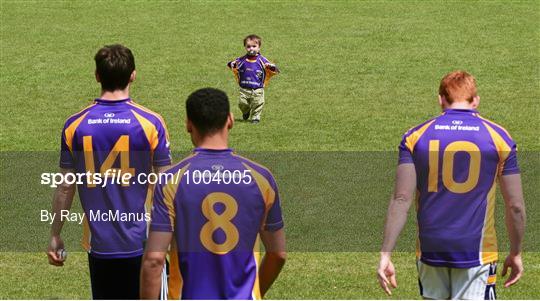 Purchase Print
1004005
View all images from this event
3 June 2015; Bank of Ireland have announced thet it has signed an agreement to become the new official sponsor of Kilmacud Crokes GAA Club. The sponsorship will commence immediately and will see the Bank sponsor the club for an initial three year period. The deal includes exclusive branding rights on all football, hurling, and camogie jerseys for senior, minor and féile teams and will also, over time, see the bank’s branding appear on the back of all other team jerseys in the club. The agreement strengthens Bank of Ireland’s support for sport, in particular the development of sport among young people as the sponsorship includes an extensive programme of games development and activity for the clubs younger members. Pictured is nineteen month old Óisín O'Dwyer, a son of Dublin hurling star Ryan, left, Craig Dias and Mark Vaughan at the launch. Kilmacud Crokes, Stillorgan, Co. Dublin. Picture credit: Ray McManus / SPORTSFILE
Email to friends
Wednesday 3rd Jun 2015
4 of 21
More Images