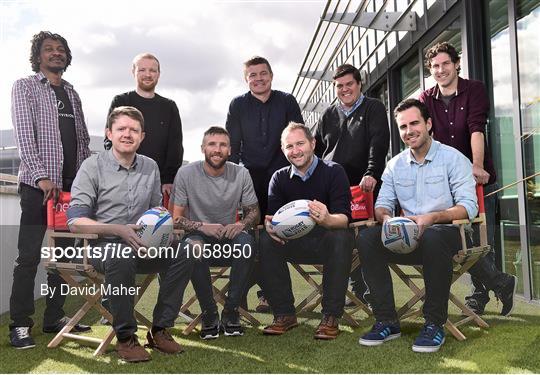 Purchase Print
1058950
View all images from this event
22 September 2015; Newstalk 106-108FM today announced that Brian O’Driscoll, Ireland’s most-capped rugby player, has re-signed his exclusive partnership as as Newstalk’s Premier Rugby Correspondent for the next two years. Following a successful first year of commentary from the rugby star Newstalk are delighted to have him on board as he takes his spot with the Off the Ball team every second Friday to talk about all the latest sporting news. The news comes ahead of the Newstalk’s Rugby World Cup commentary as the station will have comprehensive coverage and analysis with Keith Wood, Liam Toland, Shane Jennings and more joining Brian O’Driscoll and the Off the Ball team behind the mic with daily updates and opinion on air and on Newstalk.com. Pictured at the announcement is Brian O’Driscoll with from left, Raf Diallo, Oisin Langan, Mick McCarthy and Cian Murtagh; with front row, from left, Adrian Barry, Colm Parkinson, Ger Gilroy and Joe Molloy. Newstalk, Marconi House, Digges Lane, Dublin 2. Picture credit: David Maher / SPORTSFILE
Email to friends
Tuesday 22nd Sep 2015
3 of 6
More Images