Lidl Teams of the League Presentation 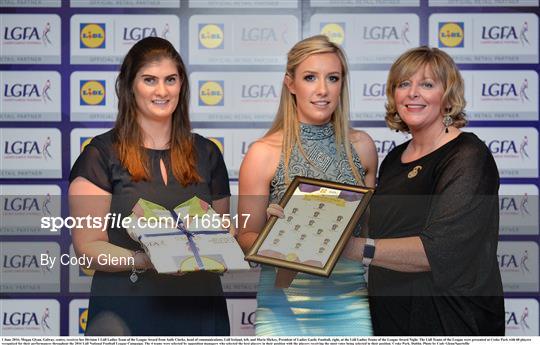 Purchase Print
1165517
View all images from this event
1 June 2016; Megan Glynn, Galway, centre, receives her Division 1 Lidl Ladies Team of the League Award from Aoife Clarke, head of communications, Lidl Ireland, left, and Marie Hickey, President of Ladies Gaelic Football, right, at the Lidl Ladies Teams of the League Award Night. The Lidl Teams of the League were presented at Croke Park with 60 players recognised for their performances throughout the 2016 Lidl National Football League Campaign. The 4 teams were selected by opposition managers who selected the best players in their position with the players receiving the most votes being selected in their position. Croke Park, Dublin. Photo by Cody Glenn/Sportsfile
Email to friends
Wednesday 1st Jun 2016
4 of 93
More Images