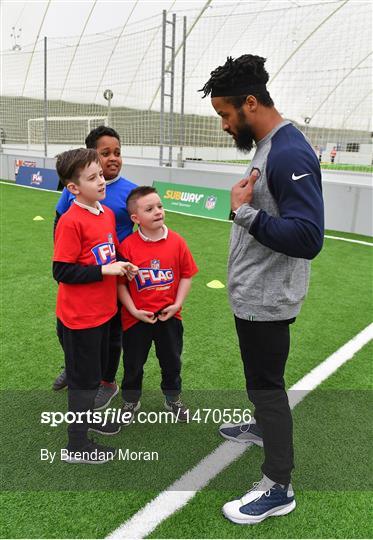 Purchase Print
1470556
View all images from this event
22 March 2018; Earl Thomas of the Seattle Seahawks, was in Dublin Indoor Football in Santry today, where he helped coach over 100 school pupils in a special flag football tournament – held as part of an NFL UK Live roadshow taking place this weekend, presented by Subway®. The NFL UK Live Roadshow, presented by Subway®, will see some of American Football’s most high-profile athletes takeover Dublin’s Convention Centre, this Saturday, for an evening of entertainment – hosted by Sky Sports presenter, Neil Reynolds. Last year, Subway® stores announced a three-year partnership to be the NFL’s presenting partner in Ireland and the UK and, as part of the Subway® brand and NFL’s joint commitment to getting the nation fit and active, Subway® is enabling the NFL to bring the sport directly into schools, across the island of Ireland and the UK. The NFL Flag programme aims encourage more children to get into sport and learn NFL values that can be applied to all areas of their lives. The pupils at today’s event – who came from Our Lady of Lourdes and John Scottus Primary Schools – were given an introduction to one of the fastest growing sports in Ireland and the UK, from one of the sport’s biggest names, before taking part in the flag football tournament. At the main event this Saturday, Earl will be joined at the Convention Centre by New York Giants’ Landon Collins, Baltimore Ravens’ Alex Collins, Philadelphia Eagles’ Jay Ajayi and two-time Super Bowl winning coach, Rob Ryan. The group of NFL stars will also be accompanied by the famous Vince Lombardi trophy. Doors for NFL UK Live, presented by Subway®, open at 6pm, with the live show kicking off at 7.30pm. Tickets for the event, which are free-of-charge, are available at: www.nfluk.com/events/Dublin.html Pictured are Earl Thomas of the Seattle Seahawks with Brody Carlisle, Hanad Axmed and Peter Collins. Photo by Brendan Moran/Sportsfile
Email to friends
Thursday 22nd Mar 2018
4 of 6
More Images