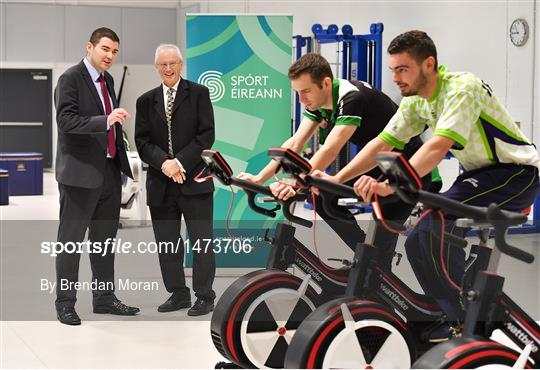 Purchase Print
1473706
View all images from this event
28 March 2018; Sport Ireland Announces €1,900,000 investment in the International Carding Scheme & €200,000 to the Team Ireland Golf Scheme. Sport Ireland today announced details of the 2018 International Carding Scheme and Team Ireland Golf Scheme. The €1,900,000 investment of the International Carding Scheme will support over 90 athletes (69 Olympic and 21 Paralympic) and 12 athletes on the top category of Podium funding. In 2018, Sport Ireland will award €200,000 to the Team Ireland Golf Scheme. This grant is awarded to the Confederation of Golf in Ireland (CGI) for the running and administration of the Scheme. Sport Ireland’s investment in this Scheme facilitates direct player support (€130,000) and indirect player support including the Challenge Tour Event and the provision of a training base in Quinta do Lago, Portugal. Grants worth €130,000 have been allocated to 12 emerging professionals with Gavin Moynihan and Stephanie Meadow receiving the largest individual grants of €20,000 each. In attendance at the announcement are Minister of State for Tourism & Sport, Brendan Griffin T.D., and John Treacy, CEO, Sport Ireland with Paralympic Cycling Ireland athlete Ronan Grimes and Ireland Clay Target Shooting Association athlete Ian O'Sullivan, right. Photo by Brendan Moran/Sportsfile
Email to friends
Wednesday 28th Mar 2018
7 of 13
More Images