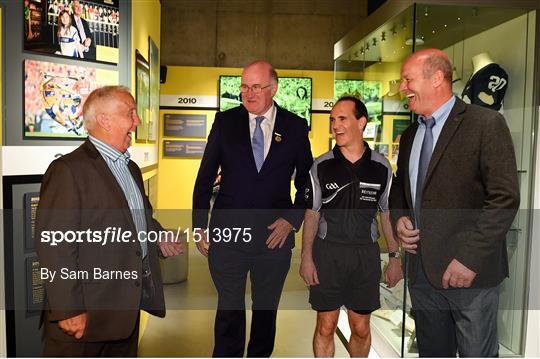 Purchase Print
1513975
View all images from this event
5 June 2018; Celebrating the launch of the new ’20 Years’ annual exhibition at the GAA Museum are from left, former Meath manager Sean Boylan, Uachtarán Chumann Lúthchleas Gael John Horan, referee David Coldrick and former Kerry player and GAA Museum Hall of Fame Inductee, Jack O'Shea, at Croke Park in Dublin. The exhibition traces the key moments in GAA and Croke Park history over the past 20 years since the GAA Museum first opened its doors in 1998. Topics covered include the Croke Park redevelopment, the deletion of Rule 21, the suspension of Rule 42 that paved the way for international rugby and soccer to be played in Croke Park, the Special Olympics World Summer Games in 2003 and the GAA 125 festivities in 2009. The exhibition also serves as the throw-in for the GAA Museum’s anniversary programme of events. Details of all the museum’s celebratory activities can be found at www.crokepark.ie/gaamuseum. Photo by Sam Barnes/Sportsfile
Email to friends
Tuesday 5th Jun 2018
26 of 29
More Images