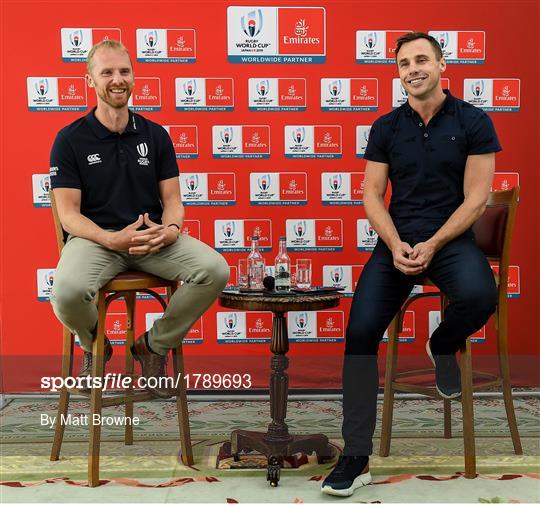 Purchase Print
1789693
View all images from this event
6 September 2019: Rugby World Cup season kicked off today at a preview of Rugby World Cup 2019™ with Emirates and Wayne Barnes. One of the best-known officials in the game, Barnes took part in a Q&A with former Irish international, Tommy Bowe, to highlight Emirates’ association with rugby. Emirates first sponsored Rugby World Cup (RWC) 2007 in France, then became a Worldwide Partner for RWC 2011, 2015, and now the tournament in Japan 2019™. Rugby has been a part of Emirates’ portfolio for more than 20 years, since the company became the Title Sponsor of the Emirates Airline Dubai Rugby Sevens, part of the HSBC Sevens World Series. Emirates is also proud to sponsor the Cape Town Sevens, the first event of the 2019/2020 Series. Enda Corneille, Country Manager for Emirates in Ireland, commented: “Rugby World Cup is one of the most iconic sporting events with a huge following in Ireland and Emirates is proud of its long-standing association with the game. At every international rugby match, World Rugby's™ elite panel of referees take to the field in their Emirates Fly Better kit. “Emirates bring people and cultures together, just as rugby brings people together through a shared passion for sport. We connect Ireland to more than 150 destinations, including Japan for Rugby World Cup 2019™.” Ireland will kick off its first match against Scotland on Sunday 22 September. Former Ireland International Tommy Bowe with Referee Wayne Barnes in attendance during the Emirates Rugby World Cup Preview at Merrion Hotel in Dublin. Photo by Matt Browne/Sportsfile
Email to friends
Friday 6th Sep 2019
28 of 37
More Images