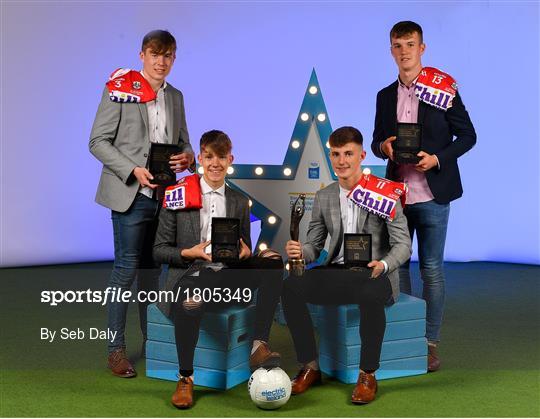 Purchase Print
1805349
View all images from this event
28 September 2019; Pictured are Cork's Minor footballers, from left, Daniel Linehan, Darragh Cashman, Conor Corbett and Michael O'Neill who were named on the Electric Ireland Minor Football Team of the Year at the 2019 Electric Ireland Minor Star Awards. The Football Team of the Year was selected by an expert panel of GAA legends including Alan Kerins, Derek McGrath, Karl Lacey and Tomás Quinn. The Electric Ireland GAA Minor Star Awards create a major moment for Minor players, showcasing the outstanding achievements of individual performers throughout the Championship season. The awards also recognise the effort of those who support them day in and day out, from their coaches to parents, clubs and communities. #GAAThisIsMajor Photo by Seb Daly/Sportsfile
Email to friends
Saturday 28th Sep 2019
77 of 148
More Images