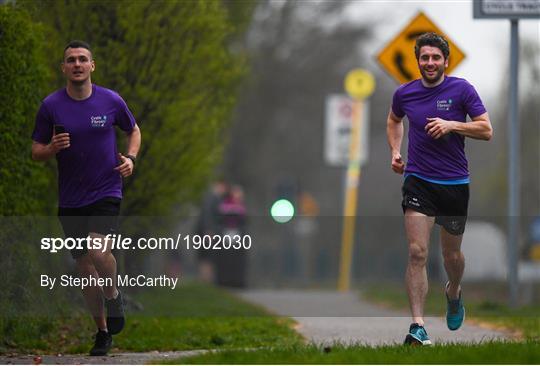 Purchase Print
1902030
View all images from this event
10 April 2020; Former Dundalk, Drogheda United, Bray Wanderers and current St Mochta's player Mick Daly, during his 8pm run, with the aid of Former Dublin footballer Bernard Brogan, right, aims to raise much-needed funds for Cystic Fibrosis Ireland. So as to reflect 65 Roses, Mick Daly along with others are taking part in a challenge - 6k run every 5 hours over the day. The 6k route in Riverwood / Carpenterstown area was first run on Friday at 12am then 5am, 10am, 3pm and final one at 8pm. Photo by Stephen McCarthy/Sportsfile
Email to friends
Friday 10th Apr 2020
1 of 42
More Images