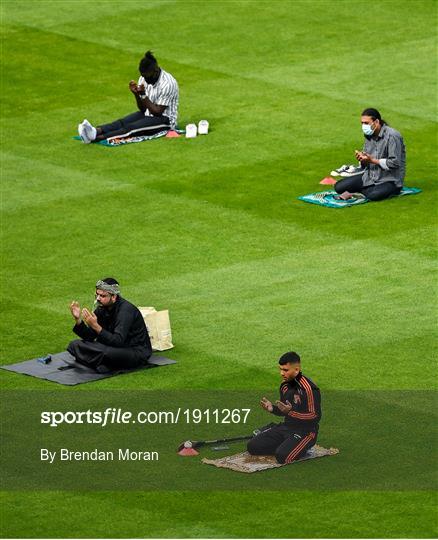 Purchase Print
1911267
View all images from this event
31 July 2020; Ireland celebrated the diversity of its country with 200 Irish-Muslims gathering in Dublin to mark Eid Al Adha on 31st July. Eid-ul-Adha or the 'feast of the sacrifice' is the most important celebration in Islam and is celebrated at the end of Hajj, which is an annual pilgrimage to Mecca. The Eid prayer took place at Croke Park to mark one of the most important days in the Islamic calendar. Those attending abided by strict social distancing rules and came together alongside their Muslim brothers and sisters to mark the occasion. The celebration was one of the first public gatherings of its kind held in Ireland since last March and was attended by representatives of the Government, ambassadors, as well as Christian, Jewish, and other faith leaders. Pictured is Ballinteer St Johns GAA club member Abooy Aljunaih, better known as 'Bonnar', with other other worshippers during the prayer service. Photo by Brendan Moran/Sportsfile
Email to friends
Friday 31st Jul 2020
49 of 69
More Images