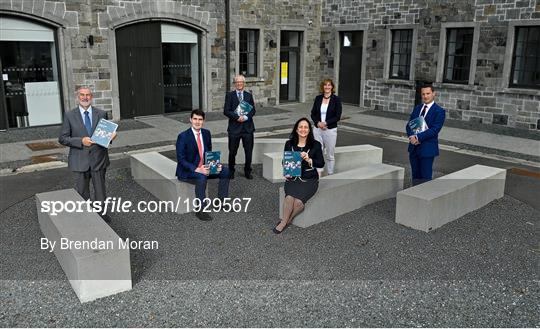 Purchase Print
1929567
View all images from this event
14 September 2020; Minister for Media, Tourism, Arts, Culture, Sport and the Gaeltacht Catherine Martin T.D., and Minister of State for Sport and the Gaeltacht Jack Chambers T.D., 2nd from left, with from left, Chairman of Sport Ireland Kieran Mulvey, Chief Executive of Sport Ireland John Treacy, Sport Ireland Director of Participation & Ethics Una May and Director of Ipsos MRBI Kieran O’Leary at the launch of the Irish Sports Monitor on the Sport Ireland Campus. 46% of the Irish population (approximately 1.7 million people) participated in sport at least once a week in 2019 according to the figures published, an increase of 3% on the previous report. Photo by Brendan Moran/Sportsfile
Email to friends
Monday 14th Sep 2020
1 of 3
More Images