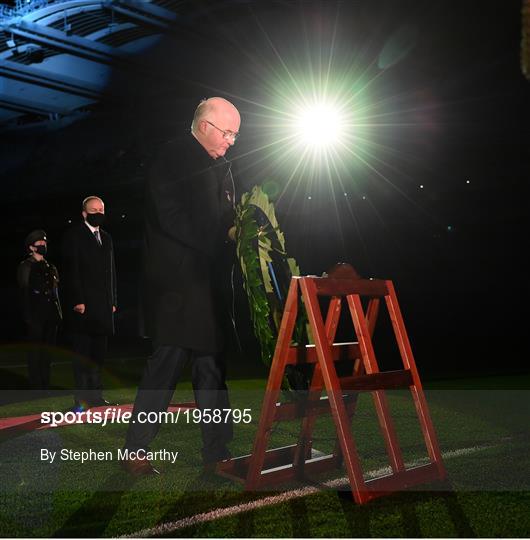 Purchase Print
1958795
View all images from this event
21 November 2020; Uachtarán Chumann Lúthchleas Gael John Horan places a wreath, as An Taoiseach Micheál Martin TD, left, looks on, during the GAA Bloody Sunday Commemoration at Croke Park in Dublin. On this day 100 years ago, Sunday 21 November 1920, an attack by Crown Forces on the attendees at a challenge Gaelic Football match between Dublin and Tipperary during the Irish War of Independence resulted in 14 people being murdered. Along with the 13 supporters that lost their lives that day a Tipperary footballer, Michael Hogan, also died. The main stand in Croke Park, the Hogan Stand, was subsequently named after him. Photo by Stephen McCarthy/Sportsfile
Email to friends
Saturday 21st Nov 2020
104 of 107
More Images