Launch of A Season of Sundays 2020 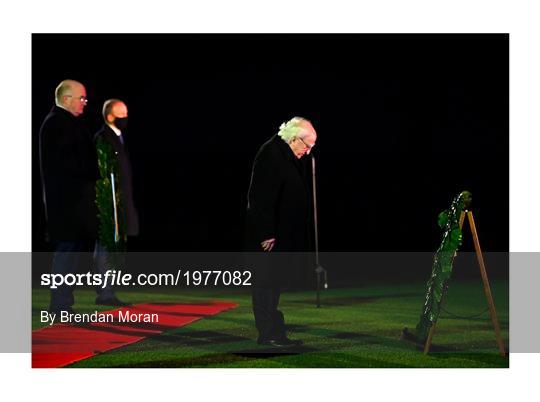 Purchase Print
1977082
View all images from this event
21 November 2020; Solemn, sombre and appropriate. The President of Ireland, Michael D Higgins, pauses for a moment after placing a wreath during the GAA’s Bloody Sunday commemoration in Croke Park, with GAA president John Horan and the Taoiseach Micheál Martin standing behind him. On Sunday 21st November 1920, 14 people were murdered in Croke Park when Crown Forces opened fire on spectators ahead of a football match between Tipperary and Dublin. Tipperary footballer Michael Hogan was one of those killed that day and the main stand in the stadium, the Hogan Stand, is named after him. A dignified and moving ceremony concluded with the words: “We will remember them all. Cuimhnínis orthu uilig.”. Photo by Brendan Moran/Sportsfile This image may be reproduced free of charge when used in conjunction with a review of the book "A Season of Sundays 2020". All other usage © Sportsfile
Email to friends
Monday 1st Feb 2021
4 of 69
More Images