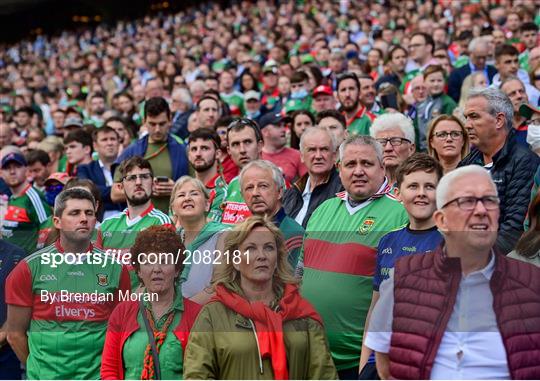 Purchase Print
2082181
View all images from this event
11 September 2021; Supporters stand for a moment's applause in remembrance of the victims of the terrorist attacks on 11 September, 2001 in the United States and the Irish people lost on that day, Damian Meehan of Good Shepard GFC, Kieran Gorman of Sligo GFC, Denis McHugh of Rockland GAA and Brendan Dolan of Rangers GFCK, before the GAA Football All-Ireland Senior Championship Final match between Mayo and Tyrone at Croke Park in Dublin. Photo by Brendan Moran/Sportsfile
Email to friends
Saturday 11th Sep 2021
533 of 1414
More Images