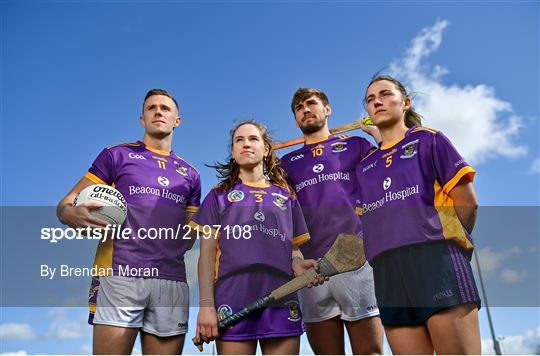 Purchase Print
2197108
View all images from this event
31 March 2022; Passion Lives at Beacon Hospital and Kilmacud Crokes as new sponsorship deal is announced. In attendance at the announcement at Kilmacud Crokes GAA club in Dublin, are, from left, Paul Mannion, Issy Davis, Ronan Hayes and Aoife Kane. A combined passion for physical health, teamwork and the wellbeing of the local community’s hearts and minds sees Beacon Hospital and Kilmacud Crokes join forces in a major new sponsorship announced today. The deal sees Beacon Hospital become the main Club sponsor of the largest GAA club in Ireland for a period of three years, with the Kilmacud Crokes club jersey undergoing its first redesign in over a decade. As the teams at Beacon Hospital and Kilmacud Crokes come together, the sponsorship will be brought to life through Passion Lives Here, which is about fostering and supporting the determination, dedication and support it takes to develop and bring local teams to greatness not just on the pitch, but also off it. A proud part of the South Dublin community, Beacon Hospital is passionate about providing exceptional patient care. It’s state-of-the-art Sports Lab, Physiotherapists, Sports Physiologists and Orthopaedic and Sports Medicine specialists are ideally located to support the club. With 140 teams, 5,700 players and members, as well as many local schools and groups all part of Kilmacud Crokes, Beacon Hospital will support the further development of teamwork and wellbeing in the club. Photo by Brendan Moran/Sportsfile
Email to friends
Thursday 31st Mar 2022
4 of 18
More Images