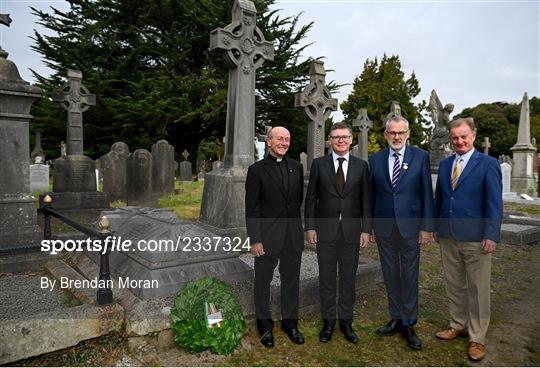 Purchase Print
2337324
View all images from this event
20 September 2022; Uachtarán Chumann Lúthchleas Gael Larry McCarthy, second from right, in the company of from left, Monsignor Eoin Thynne, Ard Stiúrthóir of the GAA Tom Ryan and Manager of the Michael Cusack Centre Tim Madden, after placing a wreath on the grave of Michael Cusack at Glasnevin cemetery in Dublin, in a ceremony marking the 175th anniversary of the birth of the Clare school teacher who played a pivotal role in the formation of the GAA in 1884. Photo by Brendan Moran/Sportsfile
Email to friends
Tuesday 20th Sep 2022
15 of 34
More Images