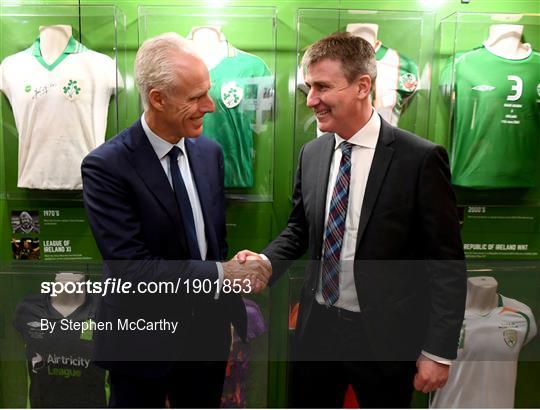 Purchase Print
1901853
View all images from this event
30 November 2018; To celebrate Dublin’s hosting of the UEFA EURO 2020 Qualifying Draw on 2nd December 2018, Irish Football Legends Ronnie Whelan, Ray Houghton, Kevin Sheedy, Tony Galvin, Liam O’Brien, Tony Cascarino and John Anderson teamed up with Dublin City Council and the Football Association of Ireland to launch the National Football Exhibition giving people the chance to experience some of the excitement. Open to the public on Sunday, December 2nd, at the Printworks, Dublin Castle, until the 9th December, the Exhibition celebrates 60 years of UEFA European Championship and Irish football. Six separate zones, packed with memorabilia and interactive features will give attendees an overview of the history of football in Ireland and its impact on communities around the country. Throughout 2019 and 2020, the National Football Exhibition will tour around various locations* nationwide. The National Football Exhibition App is available to download now from the App Store and Google Play Store. The draw for the UEFA EURO 2020 qualifying groups this Sunday, 2nd December, will be attended by delegates from all 55 UEFA member nations and over 350 international media representatives with an estimated TV audience worldwide of 140 million. 4 tournament games will be hosted at Dublin’s Aviva Stadium during UEFA EURO 2020, the largest sporting event to ever be hosted in the country. Pictured is Republic of Ireland manager Mick McCarthy, left, and Republic of Ireland U21 manager Stephen Kenny at the Printworks, Dublin Castle, Dublin. Photo by Stephen McCarthy/Sportsfile
Email to friends
Saturday 4th Apr 2020
22 of 35
More Images