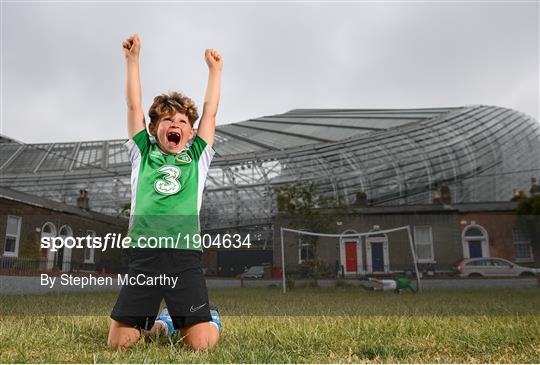 Purchase Print
1904634
View all images from this event
14 June 2020; Republic of Ireland supporter and Havelock Square resident Paddy Allen, age 7, celebrates scoring on his friend Johnny Murphy, age 8, during a kickabout on Havelock Square in the shadow of the Aviva Stadium in Dublin. Monday 15 June 2020 was the scheduled date for the opening game in Dublin of UEFA EURO 2020, the Group E opener between Poland and Play-off B Winner. UEFA EURO 2020, to be held in 12 European cities across 12 UEFA countries, was originally scheduled to take place from 12 June to 12 July 2020. On 17 March 2020, UEFA announced that the tournament would be delayed by a year due to the COVID-19 pandemic in Europe, and proposed it take place from 11 June to 11 July 2021. Photo by Stephen McCarthy/Sportsfile
Email to friends
Sunday 14th Jun 2020
2 of 45
More Images