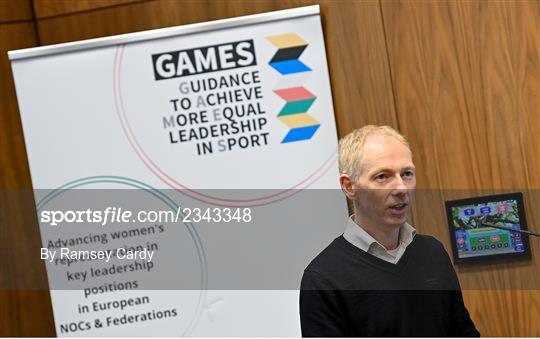 Purchase Print
2343348
View all images from this event
28 September 2022;The Olympic Federation of Ireland today hosted a gathering of many of Europeans leaders in the area of gender equality in leadership in sport in Dublin. The European Olympic Committees (EOC) Gender Equality Commission, in conjunction with the EU office in Brussels, and eight European National Olympic Committees, including Ireland, are meeting on the 27 and 28 September as part of the Guidance to Achieve More Equal Leadership in Sport (GAMES) Transnational Project. The project which is co-funded by the Erasmus+ Programme aims to achieve better gender-balance within the leadership positions in sport. Photo by Ramsey Cardy/Sportsfile
Email to friends
Wednesday 28th Sep 2022
3 of 4
More Images