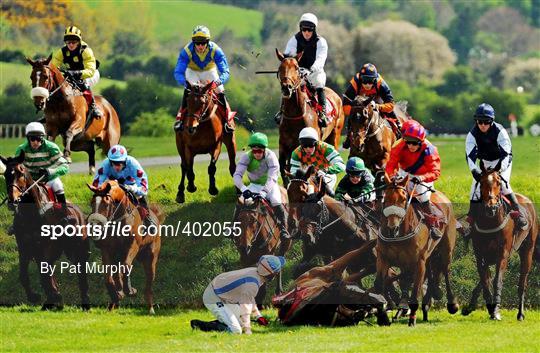 Purchase Print
402055
View all images from this event
12 February 2010; Twenty six year old Dublin man Pat Murphy from the Sportsfile Agency was today awarded second prize in the Sports Action category of the World Press Photo contest. This stunning picture which captured the award shows jockey James Carroll, after being unseated by his mount, Lord Time, looking on helplessly at fellow runners and riders approaching him during the KHC Fr Sean Breen Memorial Steeplechase at last year’s Punchestown Festival. Murphy, who hails from Clondalkin, Dublin, is no stranger to receiving awards having been a winner at the national AIB Photojournalism Awards in both 2007 and 2008. However, this is the first time he has been honoured at the world’s most prestigious press photography contest, whereby he follows on from colleague Paul Mohan who won the top prize in the same category last year. This caps a very successful past week for Sportsfile, as only last Friday the Dublin based agency captured four awards at the AIB Photojournalism Awards for 2009. For a full list of winners see www.worldpressphoto.org. Picture credit: Pat Murphy / SPORTSFILE
Email to friends
Friday 12th Feb 2010
1 of 3
More Images